MACD stands for Moving Average Convergence-Divergence. It is used to identify overbought and oversold conditions.

All cash and futures, not options

Wide-swinging trading ranges and at the conclusion of strong trends.

The Moving Average Convergence-Divergence (MACD) indicator makes use of three moving averages, usually of the exponential variety. Two are averages of price and the third is an average of the difference of the other two.

The MACD line is generated from the first two averages, subtracting the longer from the shorter. The Signal Line is simply a moving average of the MACD line. 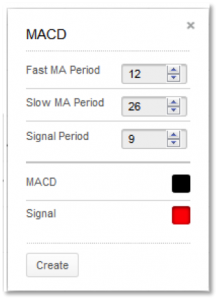 You can also select colours for the MACD and Signal Lines by selecting the appropriate box to bring up a colour palette.

In an upward and smoothly trending market, a longer average will be increasing. A short average, being more sensitive to normal price fluctuations within the trend, will show more changes in direction. If the two averages are plotted together, the shorter average will oscillate around the longer average. A strong near-term rally will cause the difference between the two moving averages to increase until an extreme value is reached. This signals an overbought condition. Conversely, in a down market, spreads will become negative until an extreme is reached indicating an oversold condition.

Other analysis includes divergence with price action. While extreme values of the MACD line reveal overbought and oversold conditions, since MACD is not indexed (constrained to move between 0 and 100), extreme values must be relative to its own history.

Finally, crossovers of the zero line are also useful in determining trend direction.

The chart shows BXB between 2014 and 2015. We can see extreme levels of MACD in January 2015 and March 2015 before prices peaked. We can also see a bearish divergence between MACD and price action in July 2015. Note that the MACD line crossed below the Signal line during the congestion zone seen that month. It preceded the price breakdown by several days`

There is also an extreme reading to the oversold side in August 2015. It was clearly much lower than previous MACD troughs seen in the chart although the trend in 2014 was rising. We can classify the resulting gains in MACD as a bullish divergence although it was not a text book case.

Signal line – a moving average of the MACD line

Histogram – same as MACD line but in a different visual format

Averages are usually based on the close and are exponentially smoothed.

>> Back to Software Documentation