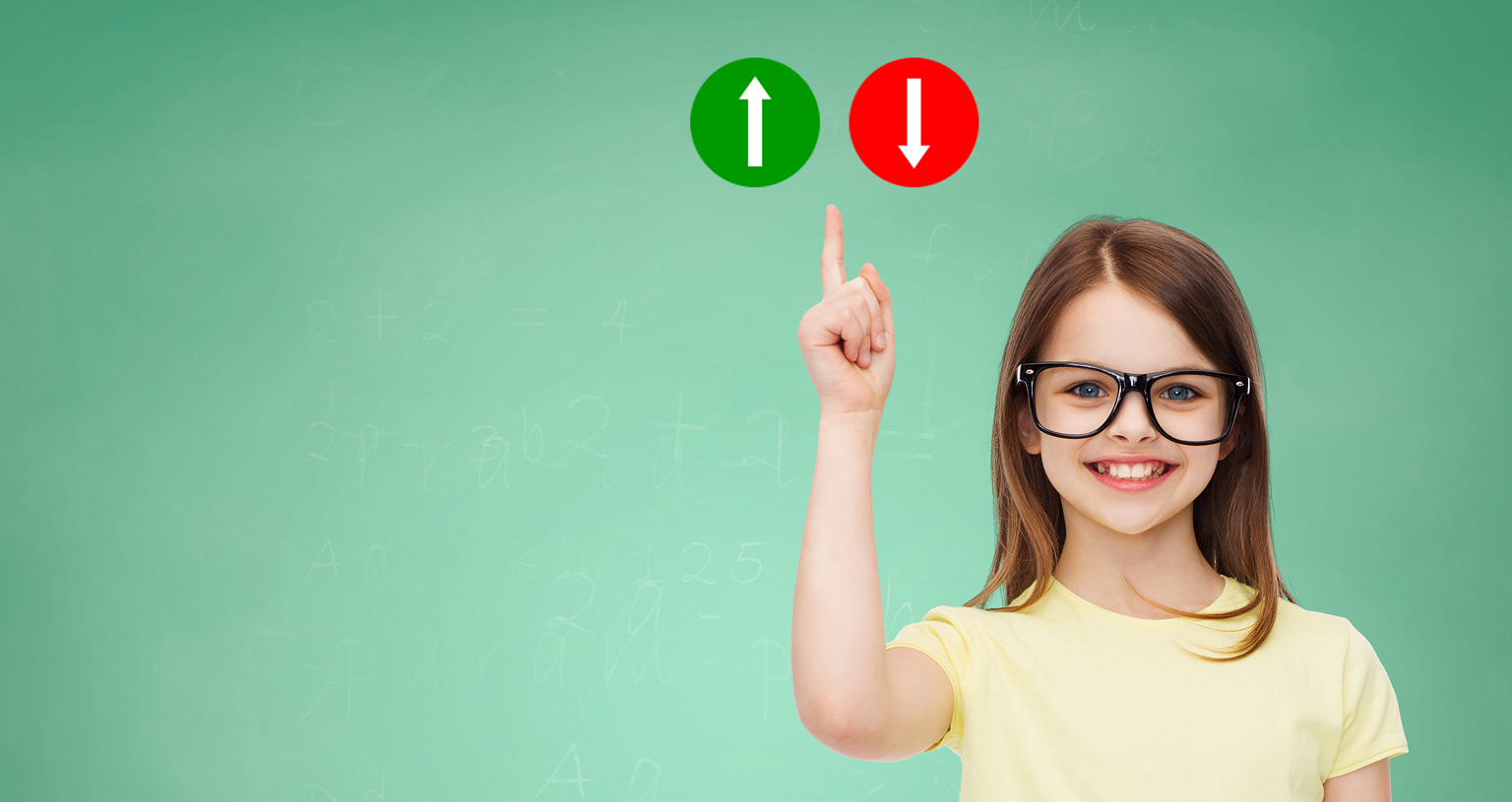 The Turning Point indicator is used to give us an indication of how significant a particular pivot point may be in relation to the history of that share. It helps us to identify possible future levels of support and resistance by highlighting previous pivot points.

All equities, not options

The number of time periods to be used in the calculation. As with all our indicators, smaller settings are more likely to be volatile. In fact, in the case of the TP it is fair to say ” the smaller the TP settings you use, the less significant that turning point will be in relation to that chart”. It is also fair to say TPs less than 13 are not recommended, as the TPs can be quite insignificant. The period count calculation takes account of the time unit for the period bar, for example a weekly chart uses weekly bars for the period variable. 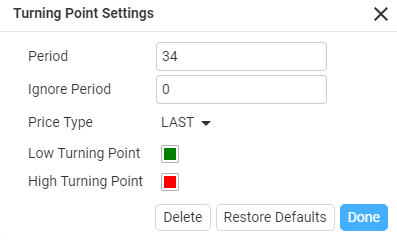 In the TP properties you have two options in Prices Type. These refer to where the high and low TP are to be positioned. 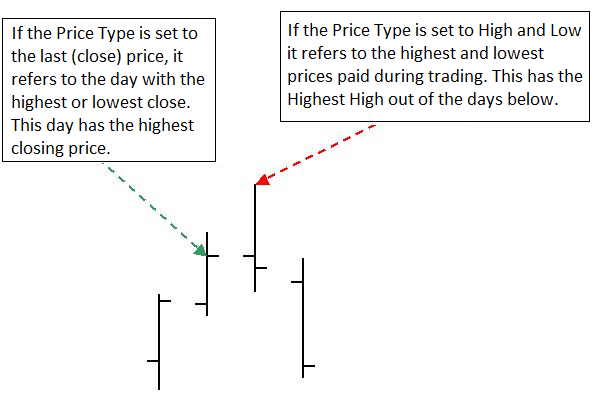 The TP is designed to indicate the highest or lowest price of the share in a predetermined time period. The larger the time period, the more significant the high or lows will be on the chart. 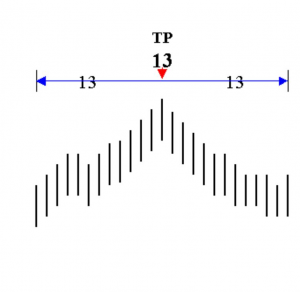 Once the count either way has been completed and there are 12 days lower or higher either side of the TP, the TP will not move again, as it no longer requires any more confirmation days. 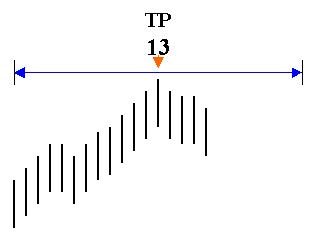 In the visual example below the new days (in Red) have gradually moved above the previous highest day that is being included in the right count. This causes the TP to move to the new high. Specifically, the 12th day in the count to the right of the original TP i.e. the last in the count, moved above the previous highest TP meaning the indicator had to move up to the newest high. The count then starts again as indicated by the arrows (in dark blue) at the top of the diagram. 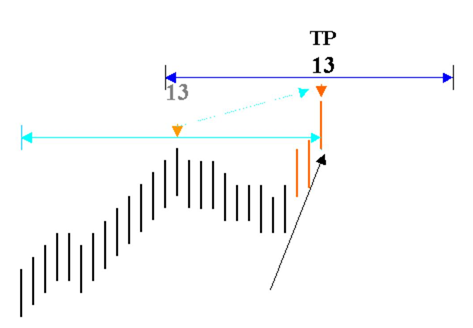 Specifically, the 12th day in the count to the right of the original TP i.e. the last in the count, moved above the previous highest TP meaning the indicator had to move up to the newest high. The count then starts again as indicated by the arrows (in dark blue) at the top of the diagram.

On the chart above you can see how easily the TP locks in on the smaller settings. The chart becomes too busy or cluttered. All of these TPs except the down TP on the far right have locked in, using a TP of 5. The one on the right will remain on that high while ever the trend remains downward and does not rise above the last high. It needs 3 more days until it has finished the count and has been confirmed.

The diagram below shows how the larger setting culls out the smaller TPs. 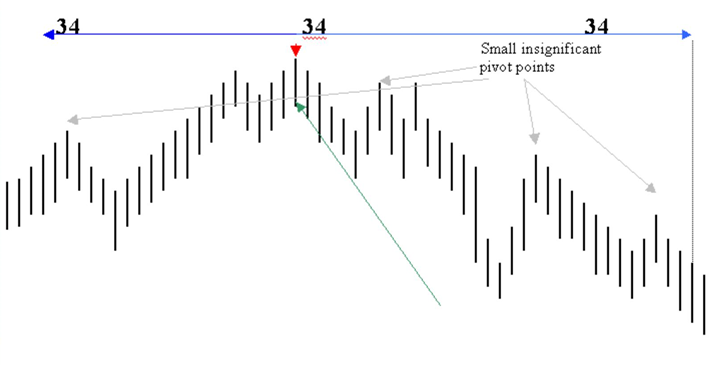 As the share did not have a run that took it above the first TP, the count of 34 could be locked in. This means that it is going to take a more significant change in direction to move TPs on large settings. Again, once it has locked in and as long as the settings are not changed, this TP will not move again. Therefore TPs of large settings that have locked in i.e. completed their count either side of the high or low, indicate to us the more significant pivot point in relation to that particular chart.

The above now uses a TP setting of 34. The difference is quite clear. It really picks out the major pivot points without the minor ones. While there are several days that do change direction, none are significant enough to pass the temporary TP.

You should also note that while the top TP is doing its count the bottom TP is also looking at the lows in relation to the time period. 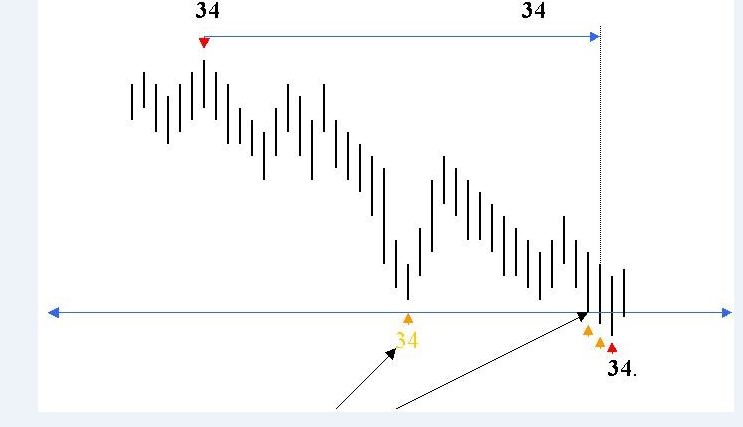 The up TP would have been here until this day, when the price moved lower, only 15 days latter. As the 34 count had not finished, the TP moves to the new lowest day and will continue following the price down waiting for a day that allows it to start the count of 34 again i.e. a price change that meets the requirements for a pivot.

In summary, as the TP is not locked in until the full time period has been taken into consideration we can only use the most recent, temporary TP, as a guide to indicate the shares position in relation to previous TPs that have locked in.

On the chart below, we can see where the previous up TPs in March and May help to indicate and identify the possible future support for the stock. TPs of 34 should be rather significant pivot points as they represent the lowest point in 65-day count, i.e. 34 days either side of the lowest point.

The down TP at the top left of the chart is also locked in, therefore it gives us an indication of where the sellers came in previously and sold the stock off. Now that the share is approaching the same level again we have warning of the impending significance of this level. They help us identify future levels of support and resistance. 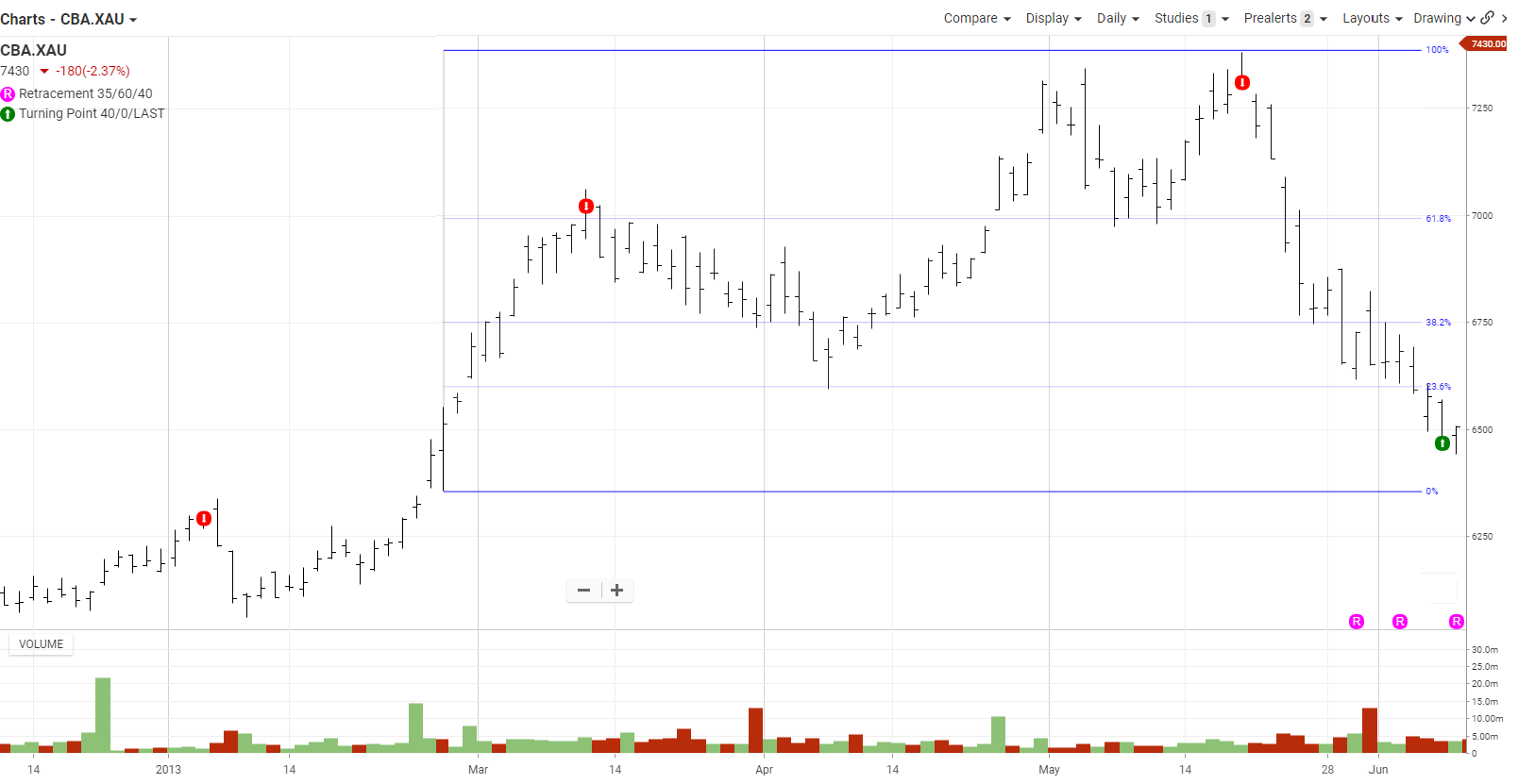 The Turning Point indicator also has a parameter titled Ignore Period and Draw Lines. The draw lines option refers to whether or not you wish to have the indicator draw levels identified by the TP as support and resistance. You can disable it by clicking in the Draw Lines box. This function works in combination with the Ignore Period. If you have the Ignore period set to zero the indicator will draw the support and resistance lines horizontally across the chart on the most recent TPs, regardless of whether or not they are locked in. If you chose to use the Ignore function the TP indicator will simply ignore the number of days chosen, previous to the last day of data (daily chart). The chart below shows the lines drawn using the ignore setting on 0. As you can see the lines have been drawn on the most recent TPs. Note that the TP on the far right is far from locked in, using a TP of 13.

The same chart below now has the’ ignore period’ set to 6. The indicator automatically initiates a count back from today’s date ignoring a total of 6 days and then looking for the highest and lowest TPs for the period setting.

For the example above an Ignore period of 6 is used. You can see that from today’s date (included) the count takes you back to the black arrow. Therefore, the TP uses every day from the first bars after the previous result in the red circle forward to the right.

The diagram below illustrates what the TP had to work with and explains how it works. The yellow days are the days being ignored and the light green arrow indicates the most recent date.

The first day in the count, 1st day out of the period, marked X, is lower than the previous interim TP while still within its count forward. It is also higher than the last lowest up TP. So therefore, the said day fails to meet any requirements that is needed for it to attract a TP, either up or down.

The Turning Point indicator is used to indicate to us the possible future levels of support and resistance by alerting us the more significant pivot points on the chart. If a large TP is used and locks in on the chart it means the price has stayed away from that price level for quite a while, indicating to you that the buyers (up TP), or the sellers (down TP), were fairly committed at these levels.